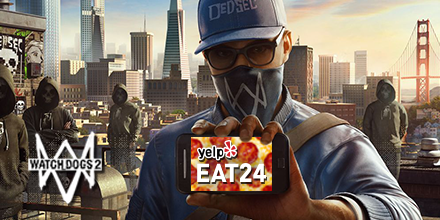 We’re teaming up with our buddies at Ubisoft to give you a shot to do just that. From 11/10/16-11/14/16 we’re giving you guys the opportunity to win a free digital copy of Watch Dogs 2 AND get free food delivered to your door so you don’t have to leave the house. Take a day off from the world, we’ll take care of you. You deserve it.

Let’s face it, going outside is overrated. Sure the graphics are really nice (super HD), but there are too many NPCs, hardly any free loot, and a bunch of the side quests can get really repetitive. So we’re recommending that you skip it and stay inside. Schedule some time for the important things in life, like playing video games for several consecutive hours and perfecting the butt groove in your couch.

All you have to do to enter is place an order of $10 or more (subtotal) on Yelp Eat24 using coupon code: WATCHDOGS2, and tell us your favorite lifehack in the “Special Instructions” box on the checkout page. 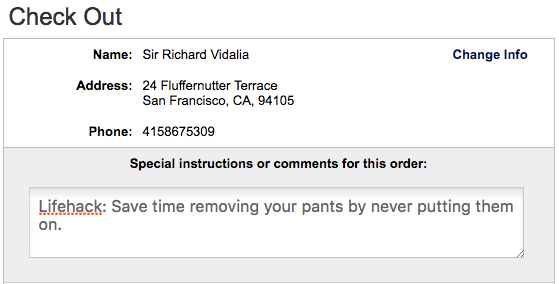 We’ll pick 100 of the funniest, most creative answers and those people will receive a free digital copy of Watch Dogs 2 emailed to you on launch day (because waiting in line sucks) and $50 worth of Eat24 credit added to your Yelp Eat24 account.

That’s it! Order up some food, save some money, and make us laugh harder than anyone else to win the ultimate gaming holiday from Ubisoft and Yelp Eat24. Stay in and veg out because your couch misses you when you leave.

*Can’t have a contest without a bunch of legalese in the fine print. So without further ado, bring out the lawye— oh, they couldn’t make it? They faxed in the rules instead? Wow…okay, we’ll just print those here: Official Rules: This is a limited time offer only open to U.S. residents and only valid between November 10th, 2016 at 12:00 AM PST until November 14, 2016 at 11:59 PM PST (lawyers are so precise). The coupon code only works if you pay with a credit card, PayPal, Android Pay, or Apple Pay, with a subtotal of $10 or more, while logged in to your Yelp Eat24 account, ordering on Eat24.com or the Yelp Eat24 app.  And it expires on Monday, November 14th at 11:59PM PST. Oh, and you can only use it once (duh). There is also a limit of one entry per person per day. This contest is void where prohibited by law. The estimated value of the Yelp Eat24 food credit is $50.00. Full contest rules can be found here.

By entering into this Contest, you agree to be bound by these Official Rules and the decisions of the Sponsor, which shall be final and binding in all respects. Winning a prize is contingent upon fulfilling all requirements as stated in these Official Rules. Each winner is solely responsible for the payment of any federal, state, or local income taxes that may result from their acceptance and receipt of any prize. All applicable federal, state and local laws and regulations apply. Void where prohibited or restricted by law.

SOME STATES DO NOT ALLOW THE LIMITATION OR EXCLUSION OF LIABILITY FOR INCIDENTAL OR CONSEQUENTIAL DAMAGES, SO THE ABOVE LIMITATIONS OR EXCLUSIONS MAY NOT APPLY TO YOU IN WHOLE OR IN PART.