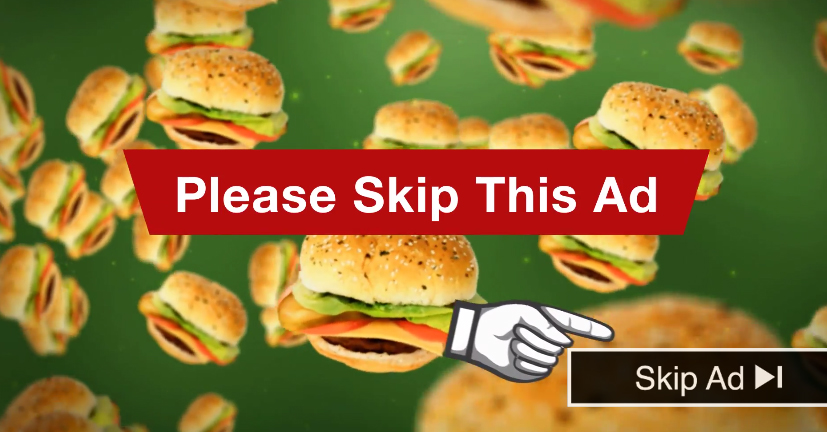 Pop Quiz: How many times have you hopped on YouTube and thought, “I don’t care what I watch, so long as I get to see a commercial about the leather interior and smooth breaks of a mid-range sedan”? The answer is approximately never. That’s because it’s sort of a dirty secret in the marketing world (and not the good kind) that ads are annoying. So let’s keep it real: We hate ads, you hate ads, and it’s probably a safe bet the ads hate us back.

Ok, maybe that’s not the most inspiring way to start a blog about marketing, but if there’s anything our more recent campaign taught us, it’s that keeping it real is as good for businesses as it is for rappers. It’s an approach we’ve found great success with, and it all started with our accountant Dave.

You see, we’d just begun a new campaign and had the Eat24 team come watch a few of the commercials with us. As the first ad came on though, a voice emerged from the crowd. It was Dave from Accounting. “Skip the ad,” he said, “We have to pay for it if we watch it all the way through.”

Dave’s kind of a twit, but his unyielding desire to save money made us think. Sure, our ads were certifiably not terrible, but they were still ads. In all likelihood, most viewers would pre-position their cursor over the ‘Skip Ad’ button, ready to blast away our commercial ASAP. And who could blame them? They were seconds away from watching a compilation of puppies or the debut of Miley Cyrus’ latest video.

That’s when it came to us. Why not just keep it real? If they wanted to skip the ad, why not tell them to do it? Worst case scenario, they skip it and we wouldn’t have to pay for the view. Best case scenario, they’d be intrigued by what kind of company would make an ad and tell them not to watch it.  So we made another ad and did precisely that.

Funny story: Asking people to skip our YouTube ad actually resulted in 91% of people completing the entire ad, which made the campaign more expensive than any of the others (Sorry, Dave).  At the end of the day, that meant 4x more people finished Skip This Ad than the next-best ad.

But the campaign’s success did not stop there.  With a 7.1% Click-Through Rate, Skip This Ad blew all the other ads out of the water.  Maybe we should have had higher expectations, but it was crazy how many people were actually putting their kitten video plans on hold to not only watch the video, but to go to our site for a few minutes to learn about us. 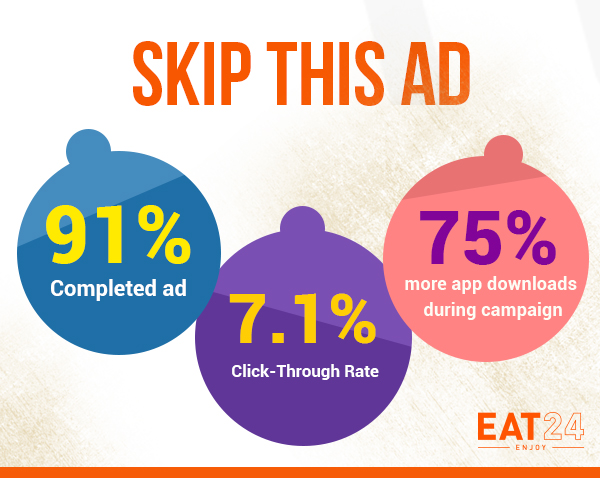 However, the real payoff came when we noticed a significant spike in app downloads during the time the campaign was running. In fact, we averaged about 75% more downloads during the weeks the campaign was running. Creating this kind of brand awareness ultimately led to thousands more orders from new customers. We were thrilled to have so many new besties to feed, and all because we kept it real with them.

You probably aren’t wondering about how our ad might affect the government, but you might be interested to know that a political insider emailed us to say he’d seen the ad and liked it. He wrote: 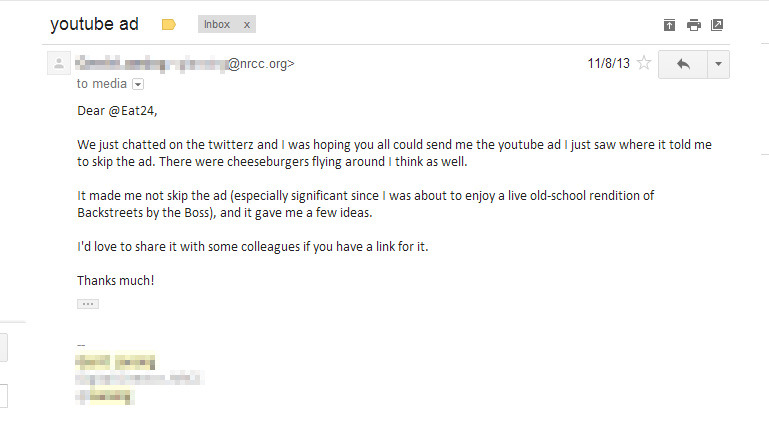 Could his ideas involve keeping it real? Would Eat24 be responsible for the first politician to solemnly swear to only fulfill 10% of their promises? Should we move on and make TV ads telling people to get up and go to the bathroom? Or perhaps it was the reverse psychology that affected people. Maybe our next billboard could say, “You aren’t hungry. Don’t order delivery. Ever.” We had a lot to think about. And Dave had a stack of checks to sign for YouTube