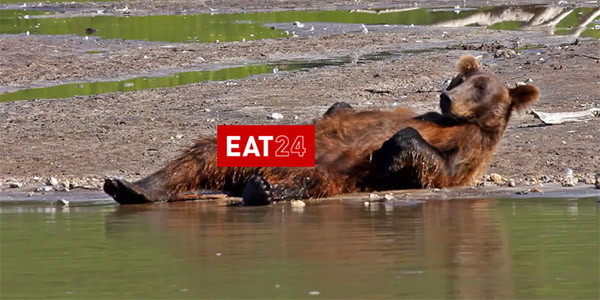 Who doesn’t love bears? They’re fuzzy, love food, and take month-long naps. Due to our mutual appreciation of laziness and sashimi salmon, we thought it would make sense to put a handsome, totally amazing bear in Eat24’s current commercial campaign. Just think, if we found the right one, he could be next in line to join the rich history of famous, lovable TV bears.

So we began our search for a bear that would change the course of history. Or maybe just a lazyass bear that made us laugh. To our delight, we found this adorable guy. He was lazy, he was hungry, and he was the perfect candidate to star in Eat24’s new TV spots.

So we made a commercial featuring our new BFF and took it for a test drive on YouTube, just to make sure it was ready for prime time TV.  Turns out the hungry people of the Internet love bears! The positive feedback came rolling in. 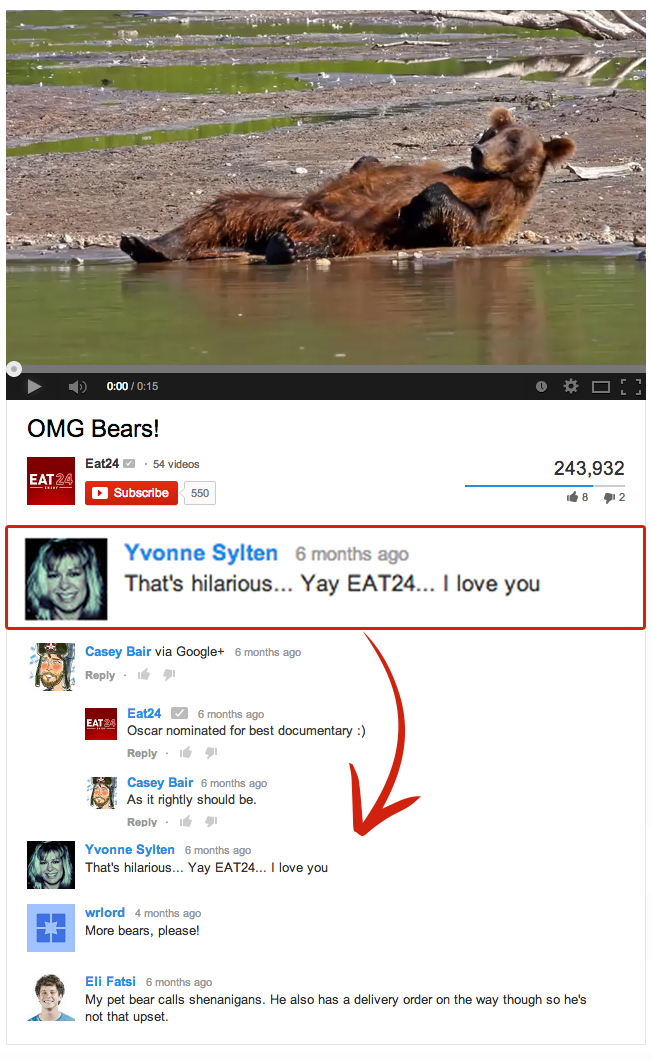 We were thrilled. We literally couldn’t stop high fiving ourselves over and over again.

Clearly, this Eat24 Bear was a winner. So we threw him in with 7 other commercials and shipped them off to 15 major television markets. Success! But wait. That’s when we got a message from our media sales rep in D.C. It seems they had a bit of an issue with Mr. Bear.

Wait, what? This isn’t the first time animals have gotten us in trouble (a certain monkey comes to mind), but just like last time, we couldn’t figure out exactly what was so offensive about our bear. He’s just relaxing and casually scratching an itch. It’s not like he had his… oh no… no no no… shit.

That’s when we saw it. In fact, it had been flopping in our face for over a month. Bear dick.

We watched this video at least 527,986 times during the editing process, and this bear’s junk was just sitting there laughing at us the whole time. We never saw it. Shit. Well, maybe nobody else will notice (please please oh please). It wasn’t until we watched our spot (which shall henceforth be known as “Bear Dick”) on a 80” HD screen that we realized how big the problem might be.

Nah… it’ll be fine. No one is going to notice this bear penis. Plus, it’s not that big of a deal, right? It’s just nature. It’s educational! It belongs on National Geographic right next to the naked tribes of the Amazon and majestic lions humping across the plains of Africa.

Then another city pulled the spot. It was Boston. They rejected our ad and didn’t give a reason. But we know, Boston. We know. Beantown ain’t down with bear beans. Oh well. Thirteen out of 15 markets approved the ad, and the commercial already started airing. The only thing we could do was sit back and see what happens.

What happened was America loves Bear Peen! OK, not really. Well, kind of.  In our 8-spot rotation, the one featuring our fuzzy friend’s manhood was by far the most talked about on social media. Public reaction fell into one of three categories.

One – People who didn’t notice the bear dick, and loved the commercial anyway:

Two – People who didn’t notice the bear dick, and hated the commercial anyway:

And what about the people who did notice the bear penis? Surprisingly, they didn’t seem too mad about it. They just really wanted to let the world know what they saw:

We also received this lovely email from a concerned (?) viewer:

OK, we know what you’re thinking, “Hey, Eat24. Cool story bro. Anecdotal evidence is nice and all, but WHAT ABOUT COLD HARD FACTS?” Yeah, we learned from the comments on our case study How to Advertise on Porn Websites that you marketing professionals really love your statistics, so these next paragraphs are for you. Let’s circle back to that YouTube ad campaign we mentioned way in the beginning of this thing. We ran all 8 of our commercials on YouTube, and you know which one was highest performing?! Yep, you guessed it (you’re good at this). The one featuring our furry pantsless friend had twice as many impressions as all 7 other ads combined. That’s right. Times two.

Yeah, but what about click-through rate? Mr. Bear kicked ass at that too. Our seven spots that didn’t feature genitalia were averaging about 24 clicks per 1,000 impressions. Meanwhile Bear Dick was getting 120 clicks per 1,000. Not only was he driving more people to Eat24.com, he was generating more orders too. #NotAppetizing, says Twitter? #NotTrue, says real life! Captain Naughty Parts was sending us triple the orders of all the rest of the videos.

Also, in case you were wondering, the Internet has stared at Bear Dick for a grand total of 41 days and counting, which is actually kinda low by Internet standards (Gangnam Style has been watched for 914,546 years, and it doesn’t even have ANY bears in it, so maybe press play on the video below and make our bear feel a little better about himself).

Bla bla bla bla bla … Conclusion? What does it all mean? Why does bear nudity make people want to order Szechuan Chicken to their couch? Your guess is as good as ours. Watch it for yourself below, and if you come up with any ideas, let us know about it on Twitter or Facebook.