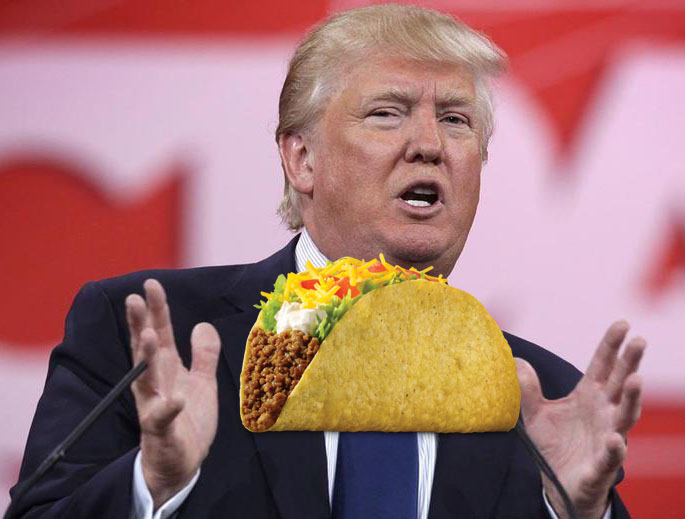 The first Republican presidential debate is taking place this Thursday, August 6th…which can only mean one thing: Time to sit back and watch the best entertainment on TV this summer, Donald Trump.

Wondering what kind of words will come out of his mouth? Us too! We’re not very political, but after reading a few articles on TMZ, we learned that Donald Trump (#HolaDonald) really likes to talk about Mexico. That’s why Eat24 is giving away one free taco every time Trump says the word “Mexico” during the debate.

Once you have a coupon code, feel free to order whatever you want. Fish tacos, cheese enchiladas, pupusas, chicken tamales, carne asada tacos, or maybe go crazy and get carne asada tacos AND a burrito with extra guacamole (or order a pepperoni pizza. Whatever. We believe in freedom of the belly, so it’s totally up to you).

Why are we doing this? Because even though Donald Trump (#HolaDonald) and Eat24 don’t have much in common besides a love of whacky toupees (is it a toupee, right?), we want to fully support your constitutional right to have pulled pork nachos and a Diet Coke delivered to your couch while you watch his face change from one shade of pink to another/contemplate his policy ideas.

Oh, and btw, since we know everyone has the same question… Yes, you’re totally allowed to Tweet at @realDonaldTrump (#HolaDonald) and tell him to say “Mexico” a million times so you can order a lifetime supply of tacos.

P.S. The codes will expire Thursday 8/6 at 11:59PM PDT so make sure you use it before it turns into a pumpkin.

*We’d never tell you what to do with a coupon, and we definitely don’t want to ramble on and on about our inner thoughts on coupon reforms, but we do feel the need to let you know that there are a few rules and regulations regarding the coupons we’ll be giving out. First of all, the $5 coupon codes will all expire on Thursday, August 6th at 11:59PM PDT. You must be an Eat24 member to use these codes, and they can only be used once on orders of $10 or more when paying with Credit Card, Google Wallet or PayPal. Also, this might seem obvious, but the codes only works on Eat24.com or the Eat24 app. Ok, you are hereby released from the Fine Print and are free to go back to thinking about tacos.