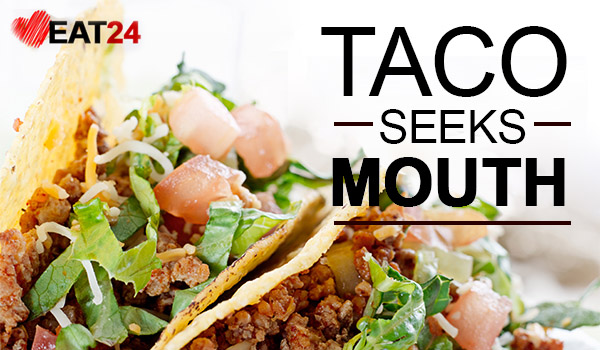 Yeah, so… we broke Tinder. Not sure what happened. All we wanted to do was find happiness for all the egg rolls in the world just waiting for the right mouth to come along. Then one thing led to another, and now we’re locked out of our account. OK, we know what you’re thinking, “YOU’RE ON TINDER? HOW COULD YOU EAT24, I THOUGHT WHAT WE HAD WAS SPECIAL.” Baby, let us explain!

How does it feel to be in a relationship with an app that doesn’t judge when you order cake for dinner? Pretty awesome, huh? Yeah. But bae, even though we’re drunk in food love with you, lately we’ve been thinking about other people. No! Not like that! Other people like… You know, the ones who wear pants and don’t know dinner is only a few clicks away. Don’t those people deserve love* too?
*Tacos delivered to their couch

It’s pretty upsetting to think about all the people who don’t know about Eat24 (living under a rock, possibly) wasting all those hours shopping and cooking and not getting hours deep into a House of Cards binge. We had to do something. We HAD too. Right? See, we knew you’d understand (that’s why we love you). So we gathered our sexiest photos and went in search of lonely stomachs on Tinder.

To be honest, we were a little worried people would tell us to choke on a burrito. Within a few minutes though, we were getting matched with a whole lotta people who saw our tacos and wanted to have a little sexy talk about them.

It wasn’t all flirting though. We also had some extremely meaningful conversations. In fact, we talked with our new friends about everything under the sun from bacon to how awesome not wearing pants is to bacon. It was all pretty exciting and we’re not ashamed to admit we’re still glowing a bit from the emotional connections we built.

Then, it turned out that one of our matches actually already knew us rather, um, intimately cuz he totally saw our bear penis.

Everything was going great until our account mysteriously stopped working. Maybe it was the sexy banter, maybe we’d crossed the line by showing everyone our tacos, or maybe just maybe it was the mention of bear penis. Whatever the case, it was great to make so many new friends, and even better to know those friends were now a little more free– free to order delivery from a restaurant one block away and not feel guilty, free to remove their pants, and free to live the dream of never leaving the couch.