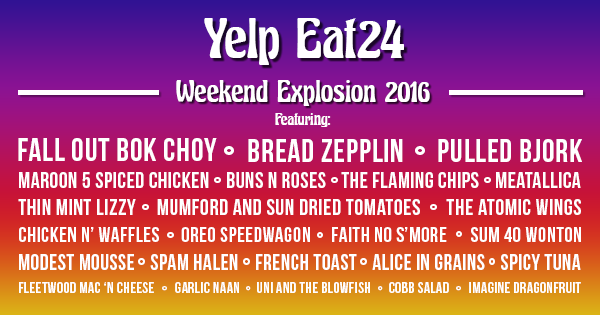 Summer is almost over (apologies to those already back to school, work, or in the Southern Hemisphere) but before we say goodbye, how about one more silly music festival (aka feastival): The Eat24 Super Great Time Weekend Explosion Couchella 2016. Best part? No wristbands, no mosh pits, no people. Just you, your couch, and a packed lineup of the tastiest foods nearby.

For the full set list, download our Official Feastival App, pop on some sweatpants, use this code to save a couple bucks*, and order something warm and cozy to celebrate the start of indoor season.

Want a bonus coupon? Just Tweet this: “Attending a super cool concert this weekend, by which I mean @Eat24-ing some eggrolls to my couch #sponsoredpost”

You’re the smoke machine to our flashing lights.

*Music not really your thing? No worries, because we’re also hosting a mini Food Film Festival featuring all of your favorites including: 12 Angry Mein, The Devil Wears Frittata, Naan in 60 Seconds, Crouching Tiger Prawn, Hidden Dragon Roll, My Big Fat Greek Yogurt, When Harry Met Salad, Grill Bill, Fudge Dredd, The Waffle of Wall Street, Raiders of the Lost Artichoke, Hot Dog Day Afternoon, Back to the Fruiture, and the classic, Cakes On A Plane. Everyone is invited, including the Eat24 lawyers who have this to say: This $2 coupon expires on Sunday, August 28th at 11:59PM PST. You must have a Eat24 account to use our code, which can only be used once on orders with a subtotal of $10 or more when paying with Credit Card, Apple Pay, Android Pay, or PayPal. The coupon is valid only on Eat24.com or the Eat24 app. So grab the biggest bucket of popcorn possible, drench it with your favorite butter-like substance, sprinkle some Sour Patch Kids, and let’s make this weekend as inside as possible!